A Community Is Born! 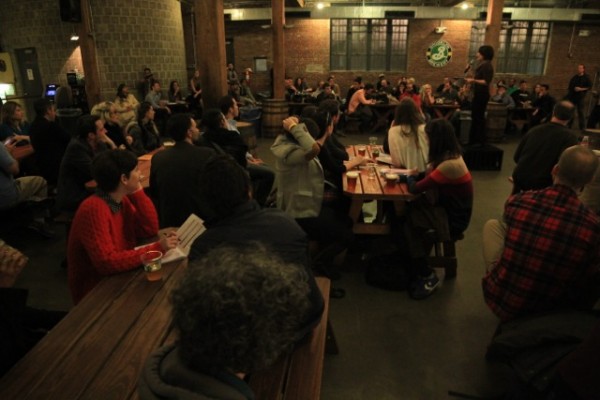 On October 23, 2013, a group of former instructors, learners and members of the now-defunct 3rd Ward community gathered at The Brooklyn Brewery to share stories, make and renew social and professional connections, and receive introductions to local resources representing the spectrum of creative work & play.

Between these seven speakers, 22 others were introduced who did not directly address the audience. They were invited in advance by Robin Grearson to participate and represent their projects and businesses. Robin and co-emcee Mark Krawczuk read brief introductions and identified these 22 people to the audience to facilitate individual connections and conversations. There were other ideas and companies presented or invited and introductions to these individuals are also included in the event recap for anyone who wants to follow up.

The event’s mission was to facilitate connections among a diverse group of creative individuals for the first time since the shutdown of 3rd Ward, giving the group a chance to converse spontaneously and dynamically according to their own interests and not to advance any one agenda, business or idea.

Now that the event is over, a mailing list has been created that will allow this group to eventually grow and continue the conversation in ways that are as yet entirely undetermined. The mailing list, maintained by Robin Grearson, will attempt to keep the group informed of future events and projects by its members as they seek support for a variety of projects. For instance, Victoria Valencia and Launa Eddy already have begun planning new projects, and they are seeking partners for those.

If you couldn’t make it, that’s what you missed. —Robin.

A Community Is Born!: A note from Robin.
Speakers: How to connect/work with/hire/collaborate with the 7 awesome speakers, the dashing emcee, and/or me.
Introductions: The 20+ others who were introduced during the event.
Ideas + more introductions: A few more people and ideas.
Writing workshops: Donation-based classes offered during the event.
Mailing list: Join.
Press
A few photos.

Much love and thanks to: Hana and Mark for helping on-site, Mike & Fernando from MAQ Security, Gabe and the generous team who gave us space and served us beer at The Brooklyn Brewery.