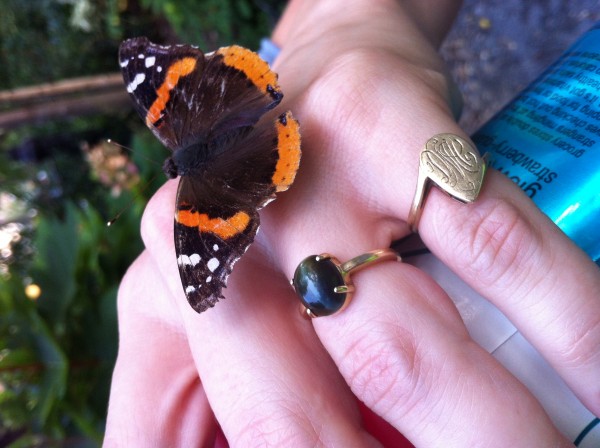 I’ve been working on a new project this summer, 100 Days (or sporadically on Twitter, #100days). I am writing one 1,000-word essay every day for 100 consecutive days.  I don’t have any plans to post these anywhere while the project is in-progress, although once I pass day 30 I’m going to start editing a few of my favorites.

I’m not alone in “100 days,” which I learned the first week. Through the #100days hashtag I discovered a painter on a similar mission who is releasing prints of her 100 days of paintings. Coincidentally, we started on the same day. Then I found out that a friend of mine, local artist Cameron Blaylock, has also started a paint-on-consecutive-days project, An Apple a Day. He’s painting an apple every day (and then he eats it). He also started on the same day, July 1, but as far as I know he’s going to stop after 30 days. Lots of coincidences lately. In fact, on two separate days, while I was writing the day’s essay, a butterfly joined me–landing on my hand and then on my keyboard on both occasions.  I can’t think of better writing coaches.

I’ve overwritten the word count on most days, and I’ve also written two essays a couple of times–once as a false start, and then yesterday a new idea came up as soon as I finished the first essay, so I wrote two. I don’t have a total word count, and I didn’t plan to count, but I can safely say that I’ve written 25,000 words in the last 22 days, in 23 separate first drafts. As every other writer says at some point, but my friend Audi  said to me most recently: writing is a verb.