Why I love Brooklyn, Reason #43

This is not the face of someone who can keep a secret. 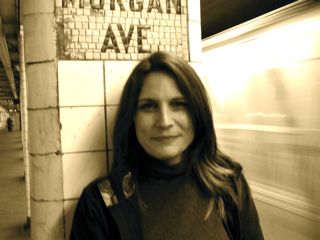 A few weeks ago I was walking down Bogart Street on the way home from dinner. I ran into my friend Sean McIntyre, who mentioned a project he was working on and said he wanted to introduce me to someone; that maybe we could all work together. And, as though the world really only has about 117  actual people circulating among a few billion extras, that’s when the Someone, Mark Krawczuk, walked up to Sean and joined our conversation.

The project, it turns out, was incredibly cool and ambitious, and secret. Mark and his business partner, Matt McGregor-Mento, decided they wanted to put a Wifi network on the subway. The network would offer content that was interactive, interesting and intelligent, to engage their target audience–not just all subway commuters, but L-train morning commuters. The L-train fills up with editors and illustrators and writers and designers who live in Bushwick and Williamsburg and work for Manhattan ad agencies and publishing companies.

I signed on to help curate writing, and went to my writers collective, 1441, and others and asked them to write for a “Secret Project,” and I couldn’t even tell them what it was for, exactly. Dolan Morgan, also a 1441 member, joined me as co-curator, and between the two of us, we gathered about 30 stories and poems. 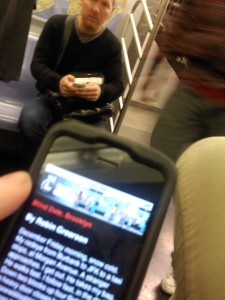 Mark and Matt selected just 11 pieces for their network–actually called the “Notwork” because it’s an intranet and not The Internet. And these stories & poems will start to run on Monday, November 14, with new content appearing each day, through Friday.

We tested the Notwork yesterday, and so now, the secret is out! Which means I can also tell you this: a favorite story of mine is running Monday, flanked by poems from two 1441 members–Matt Zingg and Michael Lala. As the week progresses, writing from Craig Savino, Ruth M. Rouse, Rachel Glaser, Melea Seward, Justin Richards and Katelan Foisy will be added. And a brand-new piece from me is scheduled to debut Friday.  I’m really happy that this newest story will appear for the first time as part of this experience/installation/social art/call it whatever you want, it’s cool. In fact, Mark and Matt’s company is called WeMakeCoolSh.it.

If you’re in the area, I hope you enjoy the “Notwork” this week.